The Effect of Border Construction on Biodiversity

This article is a post that comes from Greening Forward’s legacy blog. It was originally written by Rachel Knight on April 2, 2019.

The building of Trump’s 5.5 meters (18-foot) wall plan will affect not only humans but could potentially harm and endanger the surrounding ecosystems. 654 miles of existing barriers and walls have been built with materials such as a barbed wire to steel, bollard to wire mesh, and have already greatly affected the delicate ecosystems and wildlife on the border. President Trump favors the construction of a border wall due to his value of strong immigration policies. The president has gone as far as shutting down the government in efforts to force lawmakers to provide $5 billion in funding. Illegal immigration was a central theme of his 2016 presidential bid and he appealed to this issue by deploying 5,800 U.S. troops in 2018 to the border as immigrants from Central America desperately crossed into the United States.

Biodiversity on the border is threatened by this barrier wall, but the full effect has not yet been determined by scientists. A biologist at Penn State, Jesse Lasky, has attempted to assess the threat of the border wall. They estimated that “134 mammal, 178 reptile, and 57 amphibian species live within about 30 miles of the line. Of those, 50 species and three subspecies are globally or federally threatened in Mexico or the United States.” Various threatened species on this border survive only because people on both sides have worked hard to conserve them. 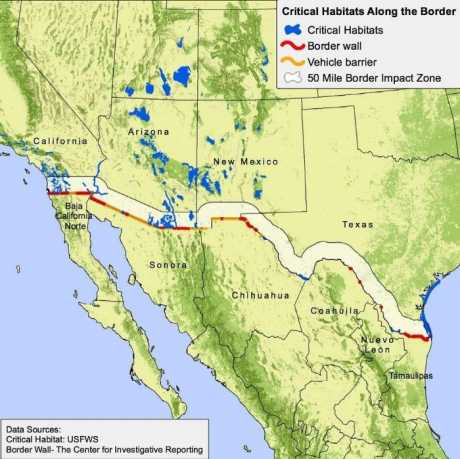 The construction of this wall is expected to uproot a protected habitat of butterflies along the Rio Grande after the U.S. Supreme Court brushed off various environmental groups that wished to fight against this decision. Supreme court justices maintained District Court ruling to allow the Trump administration to overlook 28 federal laws for southern border wall construction, a few of which being the Endangered Species Act, the Safe Drinking Water Act, and the Clean Air Act. It’s unsettling the lengths our president and the supreme court are willing to go to for this wall, purposely bypassing laws that are in place for significant reasons such as to protect our environment and species that risk extinction. It should appear obvious to the administration that having to overlook this many laws or any at all, should raise red flags and cause them to realize the potentially detrimental effects constructing a border wall would have on the surrounding territory and its inhabitants. “I don’t think it’s understood [by lawmakers], and if it is, it’s discounted. ‘Oh, it’s just wildlife, big deal, they’ll figure out a way,’ or, ‘It’s the desert, there are no animals down there,’” said Kevin Bixby, executive director of the Southwest Environmental Center. “This whole position of ignorance, it will have a serious impact on wildlife populations. It will prevent jaguars from coming back to the U.S. and some subspecies will disappear completely from the face of the Earth.

“Hundreds of thousands of butterflies housed at the nonprofit National Butterfly Center will be in jeopardy after about 70 percent of the center’s land winds up on the other side of the border wall,” according to the executive director of the center, Marianna Wright. Other concerns about this wall lie in the decline of the region’s ecotourism. Jeffrey Glassberg, the president of the center, predicts that visits will fall by half simply because it will cease to be a pleasant and peaceful place to visit. Lawsuits have been set in place against the government by three organizations, all led by the Animal Legal Defense Fund. Their claim being that construction of the wall would harm plants, wildlife, and other species such as fairy shrimp and the Quino checkerspot butterfly.

Political and economic issues surrounding the border wall aside continued construction of this wall will result in the bulldozing of land and sanctuaries that will negatively impact the volume and diversity of the species in this area by destroying their habitats or restricting access to areas containing essential resources for these species.