The Dangers of Micronized Chemical Products — With Madison Toonder

This article is a post that comes from Greening Forward’s legacy blog. It was originally written by Jacob Garland on November 12, 2018. 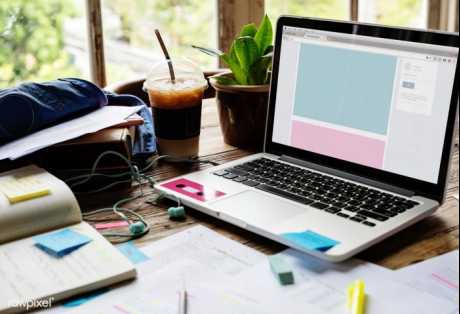 Some of the largest threats to our ocean come from sources we can’t even see. Plastics, oil, and other pollutants certainly cause serious problems, but recent research into microscopic particles (like microplastics and chemical products, the topic of today’s post) has shown that they just might be a problem of higher concern. Researchers have been studying around the clock to find out more about what exactly these chemicals do to marine wildlife, and the results aren’t exactly in favor of these products. Lucky for us, I’m in contact with one of the student researchers working incredibly hard to understand the problem.

About a month ago, I had the opportunity to travel to Washington D.C. as part of the Sea Youth Rise Up delegation. The trip was fantastic, and I wrote about it in detail in a three-part series you can check out here. Long story short, I had the opportunity to work with a group of amazing young adults, one of whom happened to be Madison Toonder, a researcher of micronized chemical products. And, even better, she said she’d be willing to talk about her work! So, let’s get to the bottom of micronized chemical products.

Q: Starting off with an introduction, what have you done over the past few years when it comes to environmental conservation or research? 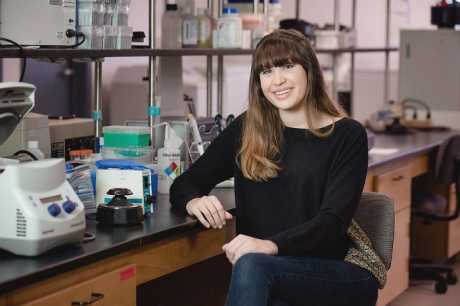 Madison: Hi, I am Madison Toonder, an 11th grader from Florida. I attend Stanford University Online High School and aspire to be an exotic or marine animal veterinarian with a focus on the conservation of endangered species. In the pursuit of this career, I actively conduct comparative research on the sea turtle, oyster, and alligator with scientists across the world and present my work on multiple platforms.

Recently, my research has been accepted by the International Wildlife and Disease Association Conference, where I will present my studies to wildlife health, conservation, and management experts and practitioners. I am also the recipient of a research grant from the Explorer’s Club. Outside of research, I intern at the Brevard Zoo as a zoo teen and conservation representative, routinely handling exotic animals and educating guests.

Over the past few years, I have conducted research focusing on an unseen, silent threat that until recently has not been recognized.

I have been analyzing the growing threat of nanosized and micronized particles of sunscreen ingredients like oxybenzone and the harm that they have on our water systems. In particular, my research focuses on the effects of micronized chemical sunscreen (or spray sunscreen) and nanosized zinc oxide sunblock on an oyster’s ability to filter bay water. I used oysters as a model organism, as they are a keystone species that can filter over 50 gallons of water each day, significantly contributing to ocean health. Unfortunately, their populations are diminishing worldwide and, like canaries in the coal mine, are indicators of poor world ocean health.

Q: How did you first find out about micronized chemical products? Was it from research or activism? 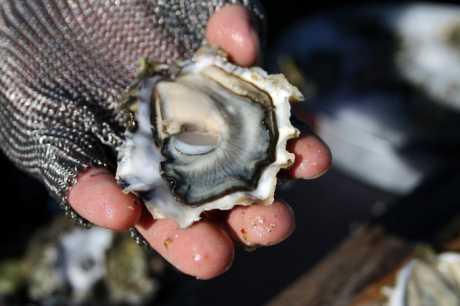 Madison: Living on the coast of Florida, I have always been acutely aware of the condition of marine life and the health of our ecosystem. However, I truly began to explore this environmental concern when I developed a research project focused on the effects of micronized chemical sunscreen and non-nano sized zinc oxide sunblock.

I was inspired to investigate this topic after observing the oily film that forms when a sunscreen-slathered beach-goer enters the water. At that time, I did some online research and connected the term “micronized/nanosized chemicals” with what I saw being dumped off into the water. Micronized materials can be as small as 0.1 microns in size, while the non-nano sized products are typically around 0.325 microns.

The main concern with micronized products (like sunscreen) is that they contain microscopic particles and therefore easily enter organisms (by penetrating the skin’s layers when applied topically or inhaled when sprayed). Through my research, I have had the opportunity to explore the devastating impact of micronized chemicals and chemical-based nanoparticles on not only marine life but worldwide heath.

Q: What kinds of effects do micronized chemical products have on ecosystems, and more specifically marine wildlife? What would you say (if there are multiple) is the worst effect they have? 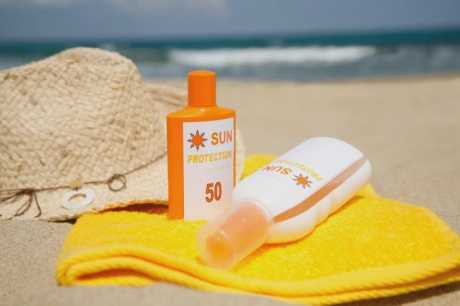 Madison: About 4,000 to 6,000 metric tons of sunscreen containing microscopic sunscreen chemicals are washed off per year by swimmers around the world (Linebaugh “The Effect of Sunscreen on our Environment”). This means that runoff containing sunblock comprised of micronized chemicals and carcinogens are being introduced into our water sources in high quantities, negatively impacting the organisms that live there. Since chemical sunscreen is typically micronized and the hazardous ingredients are microscopic, they can be ingested by even the smallest of marine wildlife, affecting them on a cellular level.

In my research, I discovered that the bivalve mollusks exposed to micronized chemical sunscreen died after only five days of exposure, as microscopic chemicals infiltrated their system and caused irreparable damage. Micronized chemical sunscreen also contains oxybenzone, a hormone disruptor; oxybenzone may have been delivered directly into the bivalve mollusk’s body and immediately caused cell damage.

Q: Why should we as humans be concerned about the effects of micronized chemical particles?

Madison: It is important to recognize that any uneducated consumer’s decisions not only threaten the balance of wild ecosystems but also decrease the quality of human environmental conditions. In one study concerning human use of sunscreen, “individuals applied a sunscreen with 4% benzophenone-3 (also known as oxybenzone, an ingredient in chemical sunscreen) and submitted urine samples 5 days after topical application. Consequently, all the subjects’ urine secretions were found to contain benzophenone-3, suggesting the body’s ability to store the substance. In 2008, the US Centers for Disease Control & Prevention conducted a similar experiment on a national scale and found the chemical compound to be present in 96.8% of the human urine samples surveyed” (IPCS Peer Review Committee “International Chemical Safety Cards”).

It is also theorized that sunscreens can actually lead to cancer! “Other studies suggest that sunscreen users have an increased risk of melanoma (Gorham 2007). A number of studies conducted in the ’90s reported a higher incidence of melanoma among frequent sunscreen users (Autier 1998, Beitner 1990, Westerdahl 2000, Wolf 1998). One factor could be the widespread use of retinyl palmitate in sunscreen. This form of vitamin A, has actually been linked to skin cancer in FDA-sponsored laboratory studies” (Wark, “Do Sunscreens Prevent Cancer or Cause It?”).

The collective environmental impact of micronized chemical ingredients could be detrimental to the environment based on what I’ve seen, but it’s already known that there’s a negative effect on humans anyway. “Sunscreens haven’t been regulated since 1978 in the USA, and the SPF factor only tells you how effective a sunscreen is against UVB rays which cause sunburn” (Axe, “75% of Sunscreens are Toxic: What to do Instead”)

Q: What are micronized chemical products most commonly used in?

Madison: Everyday products we use contain micronized and nanosized ingredients and introduce harmful toxins into our oceans, bioaccumulating in organisms, and building a plaque in our environment. Product manufacturers moved to micronizing and nanosizing ingredients due to consumer demand for clear and lighter-weight sun protection products and makeup. Unfortunately, since nanoscale technologies can be applied to almost every industry, no regulatory body is taking the lead for preventing the accumulation of micro-chemicals in the ocean. 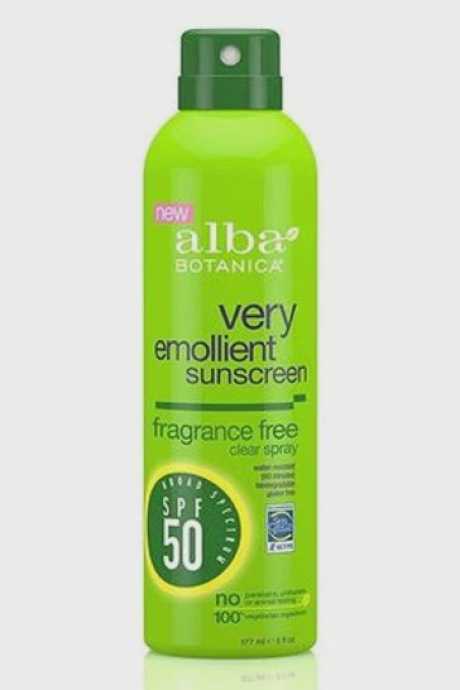 Q: What do you think are some ways we can help cut down on our use of these products, as well as makeup for the particles already in the ocean?

Madison: I would recommend that consumers stay informed regarding the content of their everyday products. If there isn’t an option to wear clothing sun protection (i.e. SPF long-sleeved shirt or hat), ideally one would limit their time in the sun/water and use a mineral-based non-nano sized zinc oxide topical sunblock.

In my research, oysters introduced to varying SPFs of non-nano sized and uncoated mineral-based sunblock were not significantly affected behaviorally or on a cellular level. This is because the large size of the particles helped prevent the oysters from filtering in hazardous chemicals and digesting sunscreen particles. Additionally, the relatively “marine safe” and “human safe” ingredients in non-nano sized zinc oxide sunblock reduce the chance of any ingredients developing into hormone disruptors and negatively impacting marine life.

Dive companies are requiring their participants to use eco-friendly sunblock because they have recognized a connection between higher amounts of sunscreen runoff and the bleaching of coral reefs. In a world of microplastics and micronized chemicals, we must hold ourselves accountable for the decisions we make to avoid products and support our environment.

And there you have it! Micronized chemical products like the ones found in sunscreen seem to have quite a dangerous effect on marine wildlife, particularly on the health of one of our greatest allies when it comes to filtering ocean water. If we want to keep creatures like the oyster healthy, then it’s up to us to make smart decisions when it comes to what sunscreen we purchase. As Madison said, looking for non-nano sized and uncoated mineral-based sunblock can really help to improve the quality and amount of harmful microparticles in our oceans. So, next time you go out to purchase sunscreen for that beach day, think carefully about which brand you choose. It could make a big difference in the health of our oysters. 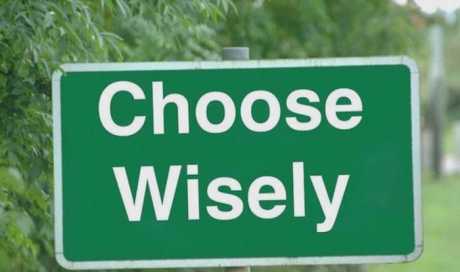 Big thanks to Madison Toonder for providing her expertise in this post!