HomeBlogPick Up Plastic for a Better World Project

Pick Up Plastic for a Better World Project

This article is a post that comes from Greening Forward’s legacy blog. It was originally written by Moname Praise on December 9, 2018. 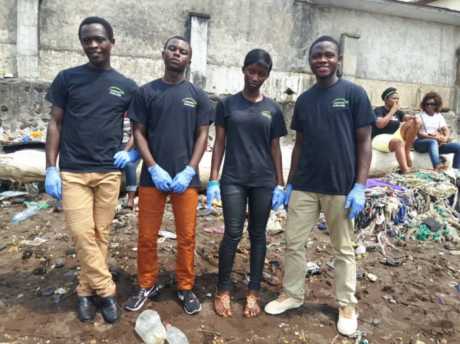 This report highlights the Pick Up Plastic For A Better World Project, a recycling and plastic pick-up competition where young people committed to reducing plastic waste. The project took place in the villages of Bwitigi, Bwiteva, and Koke from August 13–31, 2018.

Littering has become a major problem in Cameroon’s cities. Consumers who have embraced a culture of littering are most to blame; our streets, municipal drainage, streams, and beaches are flooded with plastics. A way out of this, however, is the ‘Four Rs’ — Recycle, Reuse, Reduce, and Refuse. This and the involvement of young people is crucial in ensuring a clean and sustainable environment. Thus, community-based projects that put young people at the forefront of seeking solutions to environmental issues is imperative. I decided that the Pick Up Plastic For A Better World Project would be an excellent opportunity for me to engage young people in competition with their peers to reduce waste, all the while making personal commitments to clean up.

During the contest, young people in the villages of Bwitigi, Bwiteva, and Koke competed to reduce waste by turning in plastic waste collected from the surrounding area. The competition was run in partnership with The Regional Delegation of Environment, World Litter Run, and Greening Forward. Participants of the project totaled 46, with 35 contesting for prizes while the rest served as volunteers. Many of the participants were committed in their efforts to pick up plastics and set an example that others could follow. Excluding participants and volunteers, a number of participants’ parents and adults within the community turned in old plastic bottles from their homes.

The project kicked off on the 13th of August where we divided volunteers into two groups to spread the word among the community. Prior to the event volunteers had collected over 700 plastic bottles. After news about the contest reached youths in the community, several signed up for the contest, showing enthusiasm for what seemed to them as a new practice. Participants turned in discarded plastic bottles on a daily basis until the 30th. The project featured a special clean-up by youths in the community along the streets and streams. The community also got two locally-made trash cans donated by Greening Forward.

The event was a good personal experience for me and those who participated. Throughout the contest, we collected 7,010 plastic bottles and saw to it that the community got cleaned up. Volunteers and participants were similarly enthusiastic about participating in the contest. The top five contestants each turned in more than 400 plastic bottles. The closing ceremony of the Pick Up Plastic For A Better World project, which took place on the 31st, was marked by presentations on plastic pollution by two outstanding young people. The ceremony also awarded prizes donated from Greening Forward to top contestants. All participants received notebooks, pens, pencils, environmental comics, and certificates of participation signed by the regional delegate of environment for the Southwest region of Cameroon and the CEO of Greening Forward.